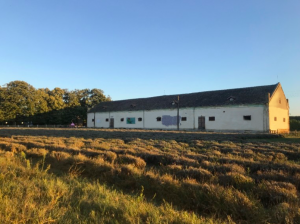 418GALLERY was founded in Bucharest in 2008. The gallery was established by Dr Joana Grevers, an art historian of Romanian origin and Guy K. Williamson, an American businessman and art collector.
Since 2017 the gallery has its headquarters in Cetate and became the first rural gallery in Romania.
The generous architectural space at Cetate, a former agricultural family estate from the second half of the 19th century, is an unusual environment and an ideal match to our young cutting-edge artists working on a big scale. Here they can develop their skills, construct unrestricted installations and create land art. Stefan Radu Cretu’s magic kinetic works, Albert Kaan’s gracious installations, Cristian Raduta’s fabulous creatures or his abstract works in concrete, just to name a few, find their way and place in and around the former buildings of the estate. The surroundings are a source of inspiration for young artists such as upcoming painter Petrica Stefan who started at Cetate to experiment with the new medium land art. On the other hand, since the beginning the gallery has been dedicated to the survey of the Romanian and Eastern European avant-garde of the sixties and seventies. These were a small number of artists who, behind the Iron Curtain, created abstract art at a time when Socialist Realism was the imposed artistic direction. Romul Nutiu developed his own form of Abstract Expressionism; Diet Sayler focused on geometrical abstraction and Minimal art; Vincentiu Grigorescu concentrated initially on geometrical abstraction, later on the materiality of the canvas.
The gallery considers Abstract Expressionism as one of the most interesting, historically relevant, artistic developments post-WWII. The Abstract expressionist movement emerged at the peak of the Cold War and, against all odds, managed to reach and influence artists living in imposed seclusion in the communist countries in Eastern Europe. Abstract expressionism behind the Iron Curtain represents a highly relevant and startling artistic movement.
Therefore, in addition to Romanian artist Romul Nutiu, the gallery also represents Edo Murtic from Croatia and Andrej Jemec from Slovenia, who were already on this path in the late 50s.
Since 2008, 418 Gallery and the Joana Grevers Foundation organise every summer the Cetate Arts Danube Residency, a workshop for Romanian and international artists.
The workshops provide an excellent opportunity to reach out and to create bonds with young artists from Romania and across Europe: Constantin Luser, Stefan Papco, Ignazio Mortellaro, Maggie Michael, Simon Iurino, Vikenti Komitski, Johannes Vogl, Sasha Auerbakh and others.
The activities of the Gallery and the Foundation aim to provide a representative view of Romanian contemporary art in the larger context of Eastern European art; to rediscover Romanian and Eastern European avant-garde of the 2nd half of the 20th century, and to foster and develop new talents among the new generation of artists, from Romania, in dialogue with artists from other parts of Europe.
Since 2017 we have a branch office in Munich where most of our works are stored and can be viewed. At regular intervals we hold private viewings of  representative works of selected artists.

Joana Grevers was born in Bucharest, Romania; in 1983 she achieved the MD from the Ludwig Maximilians University Munich, Germany and subsequently completed her doctoral thesis in medicine in 1986 at the same University. In 1997 Joana Grevers achieved her PhD in Art History from the Ludwig Maximilians University Munich. She is the Director of the Foundation Joana Grevers which sustains art projects in Romania, member of the Peggy Guggenheim Collection Advisory Board and a member of the Acquisition Committee of Russian & Eastern European Art of the Tate Gallery in London.

Ecaterina Dinulescu was born in Bucharest, Romania.
She has a Bachelor and Master Degree in Entrepreneurship & Business Administration from the Academy of Economic Studies in Bucharest.
She joined the gallery’s team in 2014.
Passionate about the fascinating art world she also works as a volunteer for Cetate Arts Danube – Artists in Residence programme developed by Fundatia Joana Grevers.
She is also a member of Salestrust.eu and ISM – International Professional Qualification student.

Antonella Grevers was born in Munich, Germany; in 2010 she achieved her BSc in Psychology from Buckingham University, Buckingham, UK and subsequently received her MA in Contemporary Art in 2014 at Sotheby’s Institute of Art, London.
She is the art consultant of 418 Gallery and a board member of the Joana Grevers Foundation which sustains art projects in Romania.
She is also a member of the „PIN.“ young Circle committee of the Pinakothek in Munich and a member of the Young Patrons of the Tate in London.

Christian Seitz was born in Landstuhl. In 2008 he achieved his Bachelor for  insurance specialization (IHK). He focused his study on project management and human resources –  IT plays also a very important role in his daily business. He joined the Gallery team of the Munich branch in 2016.